It's been a long long time since the last post. I'm still astonished with the rapid passing of the last one year. Nevertheless I'm glad that God has been so gracious to me in 2010 and believe the He has crowned me with goodness and abundance in 2011.

We had a wonderful dinner at my sis-in-law's place last Christmas and she cooked crispy pork belly. It was well-done and memorable. It is remarkable at how she has improved tremendously on her baking and cooking over the years to feed her beloved family. So blessed!

I have a Roast Pork recipe that I cut from The Straits Times dated 6 June 2010. It looked simple. So here goes the adaptation... 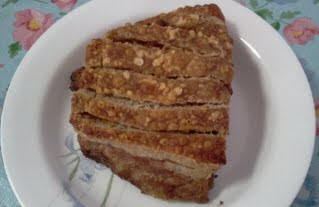 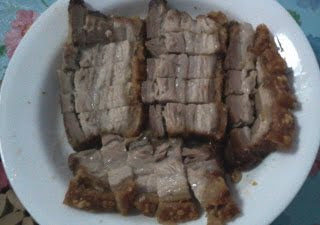 2. Score the skin of the pork belly length-wise. The cuts should be about 0.5cm deep and about 1 to 2cm apart.

3. Rub 1/5 tsp of salt and pepper on the underside of pork belly, then turn it over and rub the remaining salt over the skin. Ensure that the salt is rubbed between each slit in the skin.

4. Place the pork belly on a grill rack and roast for 30 minutes or until the skin starts to brown.

5. Reduce the temperature to 180 deg C and roast for another 45 minutes to an hour until the skin is golden brown.

6. Switch to grill mode and raise the temperature to 230 deg C for 7 minutes. Check frequently to ensure that the crackling does not burn.

7. Tap the back of a metal spoon against the crackling; if it produces a hollow sound, the pork belly is done.

I saw Precious Moments' Horlicks Doggie Cookies recipe last year and was attracted to it. So it's a must-do recipe for this year's Chinese New Year. Since I'm meeting my brother's family for reunion lunch today, I decided to made these for them this morning. Hope they like them. 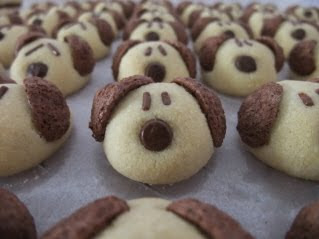 2. Cream the butter and Horlicks for 3 minutes at low speed. Do not overbeat. (I used hand whisk to beat till just creamy)

3. Add the sifted flour and beat for about one minute to form a dough.

4. Wrap the dough with cling wrap and chill the dough for 15-30 minutes.

5. Divide dough into 10g each. Embed 3 chocolate chips into each piece of dough and roll into a ball.

6. Insert 2 pieces of Koko Krunch to form the ears and 1 chocolate chip as the nose. And two chocolate rice for the eyes.

It was a bright and sunny morning of a brand new year.

I love the smell of lemongrass and having a packet of lemongrass that we bought from NTUC Finest still lying in the refrigerator, I decided to prepare some lemongrass drinks. It is my first time, so I just estimate.

While enjoying my lemongrass drink, I searched the internet for lemongrass drink recipes and came across the following article (please click on the link to read the article):

I knew lemongrass has medicinal effects and is an insect repellant, but I have never known that it can kill cancer cells. It got me excited and shall be sending that message to friends soon.

1. Cut the lemongrass into about 2 inches long and smash them.

2. Boil the lemongrass with 3 litres of water for about 30 minutes. (I put them inside the thermal pot and simmer for another 1 hour)

3. Strain the lemongrass drink and mix with honey. Enjoy it hot or cold.

The lemongrass drink recipe at Jas' Kitchen added pandan leaves too. I will try that recipe next time.

On the following week, I made another round of lemongrass drink. This time, I added pandan leaves, cut 7 large stalks of lemongrass into halves and pounded them, and then boiled with honey rock sugar (石蜂糖) and about 6 litres of water. It was very good.
at 4:58 PM No comments:

Happy New Year
May this new year bring abundant hope, joy and peace, great opportunities and blessings to you and your family.
at 4:24 PM No comments:

It's not that I've made bread that many times though. Nevertheless, I'll continue to look out for easy recipes to try out since I'm still a "newbie to bread-making". Hahaha. It sounds like a nick that my dear friend, IC, used in the flowerpod forum.

I found this interesting bread recipe that does not require any kneading at My Culinary Journal by Peony. Since I have a half packet of bread flour still sitting in the cabinet, I just needed to find some time to try it out. It's really extremely easy to make.

The first time I made, it turned out a bit like "kueh". Perhaps it was just like one of the readers at the blog had described. However, after re-heating a bit for breakfast the next day, the texture improved to become more like bread. As it was a little salty, it went very well with the nonya kaya that my sister-in-law gave us.

It turned out great the second time after baking it for a little while more. Mum found it a bit too salty, but I thought it tasted quite alright. Perhaps it was because I didn't manage to sprinkle the salt evenly.

Well, I'll definitely try it again since it's an easy recipe. 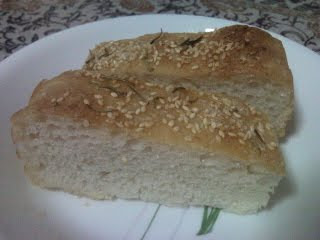 1. Dissolve the yeast in tepid water.

2. Add yeast and water mixture to a larger bowl with a cup of flour and salt. Stir for 2 minutes. Then add another cup of flour. Stir again for about 3-4 minutes. The dough should not be overworked. The consistency will remain quite soft and sticky.

3. Keep the dough refrigerated until next day for about 12 hours.

4. Remove the dough from fridge about 2 hours before baking.

5. Preheat oven to 230C. Carefully pour dough on an oiled baking tray. Use finger tips to pull the dough into shape. (Dipping finger tips briefly in olive oil will keep the dough from sticking too much to them)

6. Sprinkle 1-2 tbsp of olive oil , coarse sea salt, chopped herbs or other toppings on the dough just before baking.

7. Bake for about 15-20 minutes or until lightly browned on top. Remove from the oven and tray and place on a rack to cool.
at 10:40 PM No comments:

It's public holiday today. So made glutinous rice for tea-break and dinner. I'm sure it will end up as breakfast tomorrow too. 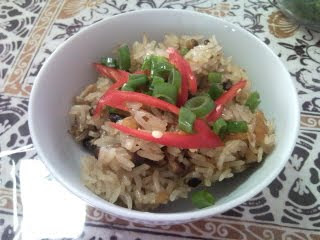 1. Soaked the glutinous rice in water for one hour. Drain and set aside.

2. To a heated wok, add olive oil and fry the shallots until golden brown.

3. Add shrimp, mushroom and scallops and stir-fry for five minutes.

7. Transfer the rice into a container and place in a steamer for 30 minutes or until the rice is cooked.

8. Remove the rice from the steamer and top with roasted peanuts, scallions and chilli.

It's been a long time since I last baked a cake. The fear of butter and sugar was enough to deter me from doing it more often. I should just say grace over the cake, sanctify it, cast out all the unwanted calories and believe that only the goodness and nutrients enter our bodies as we enjoy it.

I didn't succeed when I attempted All That Matter's Orange Chocolate Marble Cake recipe the last time and ended up with a modified version. Firstly, I did not use evaporated milk. Secondly, I used brown sugar to beat with the egg whites and it did not turn into the soft peak that ATM's recipe requires. Lastly, I did not use the orange zest.

Today, I tried to follow ATM's recipe closely, but without the orange zest.

One mistake I made today was that I forgot to wash the electric hand mixer clean before I beat the egg whites and sugar. After beating for a while, it could not turn into soft peak. Realising the mistake, I had no choice but to discard the mixture (because I really don't know what to do with it), wash the mixer and the mixing bowl, wipe-dry them, take out the measuring scale to measure more sugar, crack more eggs for the egg whites and re-do this step. Thankfully, it worked this time.

This is for mum's birthday... 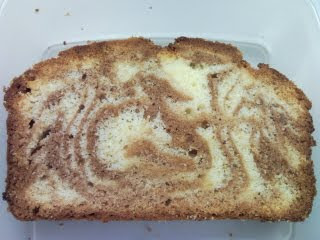 Mum said that this cake is nice. It's not too oily and thus, not so "scary". She doesn't fancy oily cakes and cakes with too much cream. It tastes really nice when it's slightly warm.

Do check out ATM's blog. Rei has also made reference to the marble cake recipe at Aunty Yochana's Cake Delight. It is a pretty tri-colour marble cake. I may give it a try.

I really admire Rei's skill in making those mahjong tiles. They really look like the real thing. Amazing. See her mahjong tiles here....
at 7:49 PM No comments:

shYan
Singapore
I'm embarking on a journey to enjoy God's blessings in my life... to live life and to live it more abundantly... to learn, to let go, to rest, to re-discover, to grow, to share...